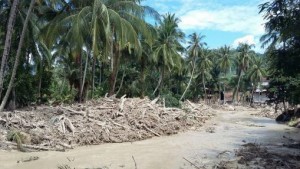 LEOT SUPPORTERS GIVE $6,000. A flash flood in a village in Luang Prabang Province has cost four lives and caused serious damage with the loss or damage to about forty houses. The flood came completely without warning on a sunny day.

Heavy rain had been experienced some distance away in the hills. It is thought that logging had left the land exposed washing mud and debris into the river and may have caused a blockage making a dam. The water later broke through and hurtled through the village and nearby countryside. The dead were of different ages ranging from a teenager to a grandfather. Many of the homeless are now living with extended family or in a local temple.

LEOT staff and volunteers joined together with a local Lao organisation called Education and Sharing to collect emergency aid including bedding, food and water and then helped deliver it to the villagers.