My name’s Lu. I was born on 12th March 1991 in a small village in the countryside, Xamneau district, Houaphan province. There are 22 people in my family, my mother, four brothers, two sisters, seven nephews, seven nieces and myself. Three of my brothers are farmers, one brother is a teacher, one sister is a farmer and the youngest sister is still a student at primary school.
When I was 5 my father passed away, leaving us all at a very young age and very poor, with our mother. When I was 9 I began to go to school. The school was not very far from my village. It was about 6 kilometres walk to the north of my village. Every morning the other boys in my village who went to school, got up early to prepare their lunch to take to school, but I never did this because my family was so poor and we didn’t have enough food.

Everyday my mother had to go to look for food that she could find in the jungle and in the mountains near our village, like mice, bamboo shoots and so on… She would exchange this food for rice from others in the village so that my family would have more to eat.

When I was 11 years old, I moved to live with my grandparents and went to study in a village near the town. I lived in that village for three more years until I finished primary school. I then returned to my village to study at secondary school. I knew that if I studied at secondary school in the town I could not afford to pay to study at the school. Thus I decided to return to study at the school near my home. It was about 9 kilometers from my village. I had no bicycle so it was very hard for me to walk to study because the school was so far from my village. However, if I studied in the countryside, I could afford to continue my schooling. Therefore, I spent my time studying in my village again. It took only three years for me to finish secondary school.

My brother knew that if I studied in town I would not finish because there was no one to pay for me. My young brother who was finishing at the Minority Boarding School, (a secondary school that is supported by the government for disadvantaged students) talked with the head of education to help me to study at that school. This school was about 80 kilometres from home. 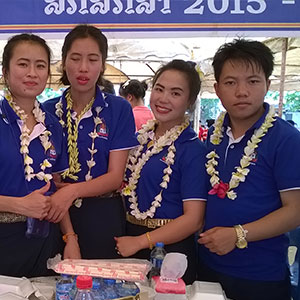 On 25th September 2009 I left my family and my village to live in a different district and different place. When I was at the Minority Boarding School, all the teachers were very nice and very kind. They were like mothers and fathers to all the students. They looked after us all very well and when I got sick, probably from lack of food, they took care of me.

In 2012 I finished my course at secondary school, but again there was no-one who could pay and support me to go to college or University. It made me feel very sad. One day, I thought that I should write and request a form from the head of the provincial education to show them who I am, and how well I did at school. I was a good student. I took my request form to the office of education in June 2012 and after a month, I saw my name on the list of five special students who had got a scholarship from the government to study at Souphanouvong University.

In September 2012 I moved to Luang Prabang and began my 4 years of study to become an English teacher. I graduated in August 2016. When I came to Luang Prabang I bought an old bicycle and worked for more than a year as a receptionist at the 3 Nagas Hotel. I had very little money and very little English but I learnt quickly by myself and often talked to foreigners.

In my third year of University I came to LEOT to apply to study English but missed the application date. It is interesting that I now am a teacher here.