I’m Chansamai RATTANASUVANNAPHON. I was born on 2nd December 1991, in the small village of Numborkeo at the top of Kuangsi waterfall.
In my family, there are 10 people including my parents. I have 4 healthy brothers; one who has epilepsy and two sisters. I’m the youngest and smallest. My family and cousins had a very happy life when they lived out there near Kuangsi but then we got the document from the government that told us to move out of that area.

They were farmers and grew rice and corn. They also kept pigs, chickens, horses and buffalo. When my grandfather and my brother got very sick, some of the land and animals were sold. When my grandfather died every household had to move away to Nonsaart village. We found life very difficult there because there was not enough land to make the farm and less income to support our ten people.

We were very poor at first so my parents decided to send my 3 big brothers to study in a temple in LuangPrabang city where they became novices. My parents didn’t have the chance to study when they were younger so they wanted to support all of their 8 children to study and be able to get very good jobs and not become farmers, working hard in the sun and rain like them.

After five years my parents moved to Paphai village, Xiengngern district. This was once my father’s home village so he had a rice field and a corn and rice farm up on the mountain. I was lucky that there was a small primary school there, where my brother and I could study and it was very close to our house.

Three of my brothers had sponsors and all became monks. so my parents just earned money to support the other 4 children in the family. On the weekends or after school, my brother and I always went to help them to harvest the rice and collect bamboo and vegetables from the forest to sell.

When I finished primary school, there was not a secondary school nearby and it was difficult to travel from my home to secondary school because the road was not good like it is today.
My first brother, Somdy, got married and worked as a tour guide in the centre of Luangprabang. In 2001 I decided to live with him in Luangprabang so that I could study. At that time, I was 11 years old and it was the first time that I was separated from my parents. I thought I now have a chance to study in the town like other students, even though I was poor and didn’t wear very nice clothes like others. I spent my free time studying English as my brother suggested. I was very shy and afraid because I didn’t know any English. Then I went to Phunluang secondary school.
In 2004, I went to the Children’s Cultural Centre after school and on the weekends. At the CCC, they taught children how to be confident, be a willing volunteer, help people from the heart, how to work in groups, learn how to dance, act and leadership skills. I learned a lot from the centre. I became more confident with studying and practising speaking English with native speakers. In 2005, I started studying general English at Manivanh College for three years.

I was very happy that my parents had now moved from home to live with me in LuangPrabang. I didn’t have to worry about them as much. 2007-2008, was my last year in high school but I didn’t have money to continue to university. My parents had stopped working, and my brother was not earning very much. My brother told me to find a job and earn money for a year then work part-time to support my studies. Before the final exam, I met a Canadian woman, Alisa Wheeler. She and her friends came and set up a waste separation project at CCC and taught students about waste management. I was really interested in that activity and I realised I wanted to work in Environmental Management in Luangprabang. My brother Champa was a consultant for the waste separation and worked with Alisa. She also knew LEOT and asked me what I would like to study and where. I wrote to her about my background and my future plans and she sent my story to the LEOT team. After my final exam, I sat for the university entrance exams both in Luangprabang and Vientiane, I was lucky that LEOT gave me a scholarship.

In 2008 I travelled again to Vientiane to do the second test and I was lucky and got a place to study. I started studying Environmental Science at the National University of Laos. It was my second time of living far away from my parents. My lonely feelings happened again. This time I wasn’t so fearful and knew it was a challenge for me. It made me stronger, and become more mature.
I lived in a small flat sharing with my classmates who were all from different provinces. During my study there, I attended a volunteer group called SEED. The main activities of the group included raising awareness about the environment in the primary school, the market and the community and how important it was to keep them clean and how bad littering was, especially for the river and other public places. 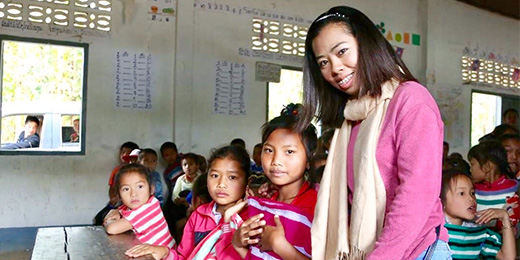 In 2009, I found that my English needed to be improved and that if I didn’t study or use it continually, my English would be forgotten. So LEOT supported me to study English at the Lao-Top College for three years. I was also a volunteer at the 25th SEAGAMES which Laos hosted in Vientiane. After that Fook, Teng’s wife asked me to stay with them because she adored me like her sister and made me feel very close to my family so that I didn’t feel alone. When I got sick she also took care of me and I lived with Teng’s family until I finished my studies.
At that time, I first met Peter and his wife. It was lovely to meet them and when my initial sponsor stopped supporting me, Peter supported my studies. A few years later, I finished my English course in 2012 and university in 2013. It was really difficult to be successful but I’d like to thank all who supported me throughout my studies – my family, LEOT, Teng and his wife’s family, without their support I may not have had those amazing experiences.

After I graduated, I came back to my lovely hometown. LEOT was the first place to give me a job as a teacher and I worked with and learned a lot from the LEOT family. The first project that LEOT gave me to do, was about raising environmental awareness at Ban Som, Chomphet district. The LEOT team, students and I spent two days and one night implementing the project. I organised a presentation to the villagers and children about the environment, and how important it is not to throw rubbish in the water and throughout the village. The students dug a large pit and we collected many bags of rubbish around the village and dumped it all into the pit.

In 2014, I applied for the government job at the Urban Development and Administration Authority and other places, but UDAA accepted me to work with them full time. However, I didn’t want to stop teaching so I started working with UDAA and teaching part-time at LEOT. I also created a group of LEOT students who worked on weekends with hotels and guest houses collecting rubbish by the riverbank and the main road.

After I had been working for a year, I applied for the YSEALI short exchange scholarship and again I was very lucky and got a scholarship to study in the United States for five weeks. On my return to Laos, I and other representatives from Laos, implemented a small project in our community. Five countries presented their project but just 3 countries, including Laos were awarded funds to complete the project. After I returned to Laos, I got an invitation to the YSEALI Summit in Kuala Lumpur, Malaysia to join the workshop about global warming and climate change and my group made a campaign about waste management.

In February 2016, my team and I trained teachers about waste separation and how to make compost and an organic garden at Aphai primary school. After implementing the project, I went to Siem Reap to join the YSEALI Alumni Workshop where the topic was about Environmental Issues. I learned a lot and made more new friends, and networked with friends from different countries.
Recently, I was a volunteer host for the YSEALI Summit 2016 in Luangprabang and I was so lucky again because I got the opportunity to meet President Barack Obama and speak to him face to face and thank him for giving a small girl like me, such an amazing opportunity to be part of this project.

Now I’m working on another project and continuing the new Green School Project at five more schools. They are going to implement it soon. I continue speaking on the radio about the duties of each section and the activities of UDAA.