Niew is the Assistant to the LEOT School Director and is a valuable member of staff as he handles the daily finances of the project, organises our visits and assists with the purchase of materials for community based projects in nearby villages. He also assists with IT problems that arise and with general maintenance of our school building. He’s often referred to as “Mr Fix-it”.

Niew grew up in Paklueng village which is located on the banks of the Mekong River in Chomphet district. It’s about 13 kilometres from Luang Prabang and can be accessed by taking a boat downstream or by crossing the Mekong by ferry and going by road.

He is the youngest son in his family, having two older brothers and two older sisters. One brother is a soldier and the other a teacher in another province. Both are married. His eldest sister lives at home with her parents and Niew now lives at the restaurant in town that his other sister owns.

As a child his parents worked in the rice fields surrounding the village and also had teak plantations. Before and after school, Niew was often to be found in the rice fields whether it was on the flat land by the river and the school or up on the steep mountain slopes near his village. He also used to help with collecting and sawing firewood for sale and making and selling charcoal. Charcoal was made by digging a big pit, filling it with chopped up wood and then setting the wood alight and covering it all with a sheet of metal. This would usually take 1 or 2 nights depending on the dryness of the timber used.

Niew attended the local Pakleung school from Kindergarten to secondary school before going to high school in Chomphet about 12 kilometres away. He was a good student while he was in primary school and came top of his class each year. He used to ride his bicycle each day to school, but after heavy rain, the road was often flooded and it was impossible to get to school. On those occasions, he would have to turn around and ride back home again. In those years they didn’t have a phone.

After graduating from high school he studied General Business Management at Souphanouvong University in Luang Prabang. His brother studied at the Teacher Training College. Niew and his brother were able to continue their education, as his parents sold some of their land and teak plantations to pay the university fees. 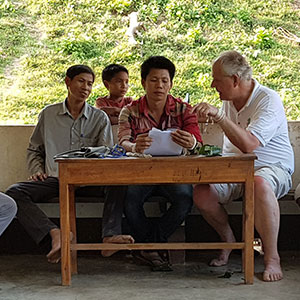 During his first year at University he failed all subjects and had to then pay to do these subjects again. That taught him a valuable lesson and for the remaining 4 years he again topped his classes.

At the completion of his university studies he applied for a job with the Tax office but after a two year wait, was not offered a place. During this time he met Alan who offered him a job working at LEOT and helping him with the daily financial aspects of the school, and he became a LEOT Scholarship student. In those days, he spoke very little English and was quite shy. Since coming to work at LEOT however Niew’s English has greatly improved. He also has a keen sense of humour and is very fond of playing tricks on people!

When Niew first studied at university he left his village and moved to live in Hadhien village in Luang Prabang. He borrowed a bicycle from his cousin. His bike was old and often needed to be repaired. If he couldn’t fix it himself, he used to walk to university. Every weekend however, he would return to his home village and help his parents with the rice field, make charcoal or collect and chop firewood for sale.

Niew is now married to Kham. He met Kham one day when his younger brother came to visit him and they went out to Viengkham restaurant with a group of friends. This place is very popular now for teenagers to go and meet other young people. That night he asked for her phone number, but she didn’t give it to him. Her friend gave him her number and he called every night for a week before she agreed to see him again.
They married on 28th June 2015. 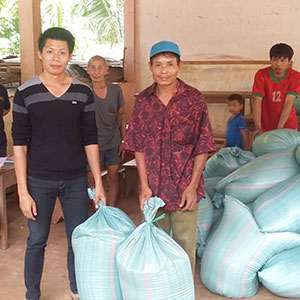 When he was in Year 3 at University he moved to his sister’s grilled duck restaurant to live, but this restaurant was a little far out of town and didn’t do very well. His sister then sold this restaurant in 2013 and bought another restaurant near the new bridge. They named it “Lucky Star”. Niew and his wife went to live there and help his sister run the restaurant. They have a small room to themselves and Kham helps with the cooking.

He is kept very busy at LEOT throughout the week and then in the evenings and on the weekends he works at the restaurant, often having very late nights. At the restaurant he helps his wife and sister, but also maintains the petanque courts, cleans the swimming pool, and supervises the karaoke rooms that people can rent out each night. Sometimes there are parties held there and Niew organises the band or music for these special events.

When he was in high school, he wanted to play the guitar. He saved some money and bought himself a guitar and taught himself to play. In the last 2 years he has also taken a keen interest in playing the keyboard and forming his own band. Now he has lots of musical equipment and people hire his band, “Lucky Star” to perform at parties throughout the year.