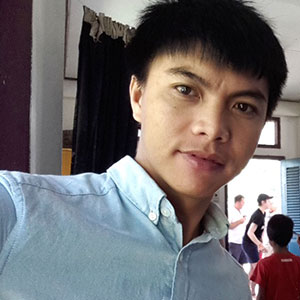 I was born in Ban Houana, a small village in Numbak district in Luang Prabang province on April 18th 1990. My home was out in the jungle, where people were very poor and it was hard for families to make a living. When I was 5 years old, the government moved the people in my village to a bigger town where there were proper roads and electricity.
My parents were farmers and grew rice, corn and some vegetables. They also kept some chickens and pigs. I have 2 younger brothers and 2 younger sisters. They still live at home with my parents. One of my sisters is married and my other sister is only 2 years old. When she was only 5 months old she had an accident and her hand and leg were badly burnt in a fire. She still has difficulty with the fingers of her right hand.

I first went to school when I was 8 years old. There was a school in my village so I could easily walk every day. I then went to the secondary school at Numthouam high school and I finished high school in 2009. I went on to study at University. I liked studying English a lot and as I needed to pay for my studies, I got a part-time job working at the Lotus Villa Hotel as a receptionist and waiter for three years. I worked from 7:00am – 3:00pm while studying at University in the evening.

I graduated from Souphanouvong University, majoring in Computer Engineering. While there, I applied to go and study with an Agrostudies organization in Israel. I was one of 60 students who passed the interview and was accepted to go and learn by doing agricultural work in Israel for one year. 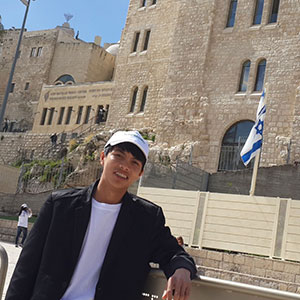 When I came back to Laos, I began looking for work with an NGO because I had decided I wanted to work and help poor people in the villages, just like the village where I was born. I then got work with the Support Lao Children charity organization in Luang Prabang and came to live in Luang Prabang and rented a room. My work with this charity involves supporting the food program at the orphanages. I organize the buying and distribution of eggs, milks and some school supplies to the children in the village as well as assisting with the collection and distribution of clothing. I also do the accounting 5 days a week.

A year ago I got married. I met my wife at the Hmong New Year celebrations here in Luang Prabang. She is a primary school teacher.

In May 2016, I met Jeannette, the Director of the LEOT English Centre and she asked me if I would like to work part-time as an IT teacher. I had been thinking that I wanted to work more and earn money to help pay for my little sister to go to school, so in October 2016, I decided to work part-time at LEOT as a teacher. I now teach 2 computer classes (Microsoft Word, Excel, PowerPoint) there on Saturday mornings.