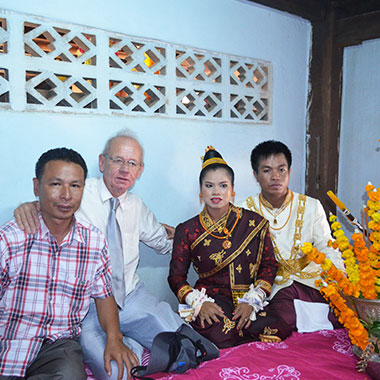 I was born on 13th July 1984 at Laeng village, Houayxai district, Bokeo Province, Lao PDR. My family has five people, a younger brother, two sisters, dad and I. All of my family are farmers, When I was growing up in my village, our family was very poor and my mum died when I was a child.

Although mum died and never came back again, my sisters and my brother still had our father to help us or discuss things with when we had a problem. After my mother died, dad stayed with us for a short time and then he died and we lost an important person in our family and our livelihood became very difficult. At that time, it became very difficult getting enough food & rice for our family to eat.

My brother and I had to depend on our sisters and every day my sisters were very busy working. They planted rice and went looking for food growing in the fields nearby our village. They found and dug out wild taros, cassava, bamboo and corn to consume instead of just rice. Sometimes my sisters worked and earned some money to buy clothes and food for all of our family. I was very upset that my sisters had to work so hard and didn’t have time to go to school like other people. Even now they are uneducated people because no-one was able to support their education. 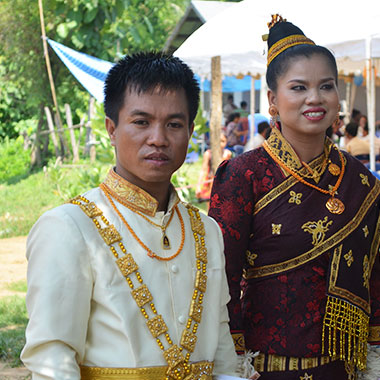 My brother and I were very lucky that our sisters gave us a chance to study. I started to study at primary school when I was 10-11 years old, but I only studied for seven months because the school was very far from my village and I didn’t have a friend to walk with me. The distance from the village to the school was about 15 kms with many hills to climb on the way. It took me about two and half hours to walk there and sometimes on the road there would be wild animals like tigers, bears and wild buffalos because we had to walk by the jungle that was close to our village. A few of my friends used to walk with me but when they stopped going to school, I didn’t want to go either because walking alone was dangerous.

One day the headman and the recital man of the village announced that 9 boys could go and live at a temple in another village and study for 1 year to become a novice. Our village did have a temple but it didn’t have a monk or novices living there. So 9 boys went to Nampouk temple which was quite far from my village, about three and half hours away.

I was one of the nine boys who was elected to go and live there. After one year, all of the boys left except me, so a senior Abbot took me to a primary school in Houayxai district. I started to study again at a primary school there and stayed until the second year of secondary school. 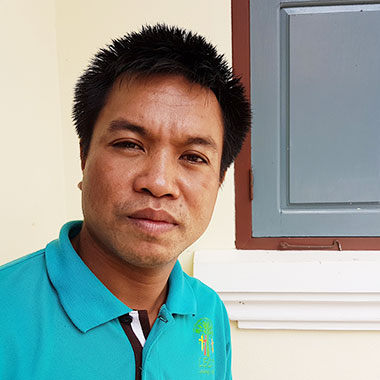 At that time a senior monk took pity on me because I had stayed with him for seven years, so he brought me to Luang Prabang and I lived at Sibounhouang temple and continued to study secondary school and high school. When I had completed my studies at school, I couldn’t apply for any further study because I didn’t have any money to pay for my high school certificate.
For one year I learnt English by myself at the temple until I met Mr. Alan. He was on holiday in Laos and walked past my temple one morning and I greeted him and we talked only for a little while because I feared I would interrupt his time for visiting other temples. He had just arrived in Luangprabang for the first time.

I was very proud when I practised my English with foreigners. At that time my English wasn’t very good. After a while Mr Alan said good bye and told me that he would come back to see me again. I told him that I wanted to practise my English some more. When Mr. Alan came back to meet me again we talked generally and I spent time to explain about my studies and my family.

I wanted him to sponsor me but he hadn’t offered to do that before he returned to England. However he gave me his email address to contact but I hadn’t got an email address, computer or phone. So I went to the computer centre to learn. After three months I was able to send an email to Mr. Alan. He said he wanted to help but he needed to find some money. Later he said in an email that if I got a place at university or college he could help me.

I then went to Vientiane with friends to take an exam because the colleges or the university in Vientiane are better than in Luangprabang. As well, even though Luangprabang has a university and two colleges, monks and novices couldn’t study there. I didn’t think I would pass my exam in Vientiane because I didn’t think I had enough experience and I had no contacts at the university or college. Luckily, I did pass and I got a place at Rattana College (RBAC). I studied for a bachelor degree for five years in General English Administration.

I was the first student whom Mr.Alan sponsored. After that he helped a few others to study and went on to found LEOT. When I graduated, Mr.Alan made me the first teacher at the LEOT school that he had built with his colleague Chris, Peter and others.
Today, I have been a teacher for four years at LEOT. I was married in 2013 and now have a son. I was the first scholarship student from LEOT. Now I live at Phonesaart village, Luangprabang district and province. I am very happy now and I want to thank Mr. Alan, Chris, Teng, Veera and Peter and everyone who supports LEOT because LEOT has changed my life.