Bounchan was born in the village of Chantai, Houn district part of Oudomxay province on 7th April 1989.

His parents were rice farmers. They grew some corn and also kept chickens, pigs and buffalo. Today most residents still make their living by growing rice, but some of them now work on the banana plantations, on land now owned and managed by Chinese.

He had 7 siblings, however he remembers little about 2 of his sisters who died at an early age. One brother also became ill and died at 5 years of age.

He still has 2 younger brothers, one a soldier and one a student studying in Vientiane. His older brother, who lives in Bokeo province once studied as an accountant but now works as an engineer. His younger sister who is still at school is the only one now living at home with her parents.

Bounchanh is clearly the favourite son and as such gets a lot of pressure from his parents to show his love for them by helping financially, as well as returning to his village and helping with the rice crops – planting, harvesting etc. However, getting back to his village is not a quick and easy task as it takes about 7 hours by bus to get there and then a short motorbike ride from the bus station to his parent’s house.

He was a keen student and attended the Houn Secondary school which was about 7 km from his home.  He would ride his motorbike there each day.

In Grade 4, he was taught English for one and a half hours a week and at this time he thought he would like to enter the temple and become a novice like his uncle and that this would help him learn more English. By Grade 5, there was no English taught at his school and he changed his mind and decided he would like to be a teacher or an electrician. 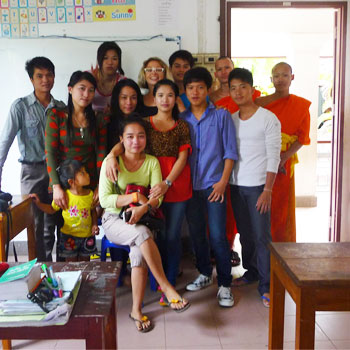 After completing Grade 6 in 2009 he graduated from high school and took an entrance exam for Souphanouvong University in Luang Prabang. He chose to study either as a teacher or an electrician and was accepted into the Faculty of Education. His parents agreed with his choice and were able to offer limited financial support and pay for his studies but he also needed to work to pay for his daily living and dormitory fees. At this stage he knew no English.

Within 2 weeks of arriving in Luang Prabang he had started working with a builder to earn some money.

He then worked in a restaurant for 3 months, knowing very little English and learnt more by talking to the customers. He then applied for a job as a waiter in a hotel and worked there for 2 months. Later, he went on to work at another restaurant for 5 months and also in a guest house.

In 2013 he didn’t get paid work but chose to work as a volunteer English teacher at the Sikeud Vocational Training Centre in Luang Prabang for a year. At the same time as volunteering there and working part-time, he continued to study hard and continually worked at improving his English.

He graduated from the university in September 2014 and returned home to look for work in his district. He hoped for a government job and waited many months for a local teaching position to become available. However in time, he learnt that there were to be no teachers employed and no scholarships awarded that coming year.

A friend from university who was working at LEOT  contacted Bounchanh and encouraged him to apply for a teaching position that had become available at LEOT. He came as a trainee teacher in May 2015 and in September 2015 commenced as a full-time teacher.

We are so fortunate that he chose to come and teach at our school.