Chandy was born in Houang Salak, a village in Nga district in Oudomxay province in July 1987. There is no record of his birth but his mother knows that it was a July, so he has picked July 7th as the day he was born. 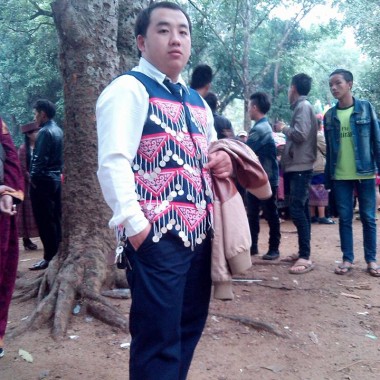 His parents were farmers and grew rice and corn and a few vegetables. They also kept some chickens and pigs.  He has  2 brothers and 7 sisters.

He went to secondary school in Phoukein and decided to study at university to become a teacher. To do this he needed to move from his home and go to either Vientiane or Luang Prabang. He chose Luang Prabang because it was smaller and easier to get around than Vientiane and also closer to his parents’ village.

He needed to pay for his studies so he worked part-time at several guest houses and slept there each night. He then worked for 2 years as a waiter at the Tam Nak Lao restaurant from 4.30pm- 11pm, while studying at university in the day time.

Being Hmong, one of Chandy’s sisters, once married went to live with her husband’s family. Sons, on the other hand, once married, stay on in the family home with their parents and help with the farming jobs. When Chandy marries later this year, he will begin by living in the family home and then, when money allows, he will build another house next door to his parents, on the same piece of land.

When Chandy graduated from Souvannaphong University, from the Faculty of Education, he was working full time through the day at the Luang Prabang View Hotel. He began looking for a teaching job and applied for work as an English teacher at LEOT. After some initial training, he was taken on as a trainee teacher for 3 months and came to LEOT at 4.30pm each day after finishing his work at the hotel. 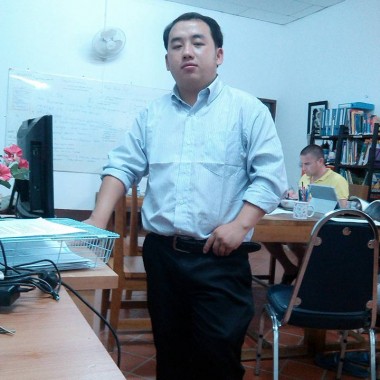 In January 2016, he became a full time teacher and changed his hours of working at the hotel to 10pm – 7am, and worked as the night auditor. It was a hard regime to follow, demanding and tiring with little sleep, however he needed the income as he had decided to buy some land, bring his family to Luang Prabang and build a house. Chandy thought that having his parents living closer to him, he would be in a better position to take care of them, as they got older.

Chandy found some land at Ban Phanom, about 5 km from town and selected a piece of land in a new subdivision. He had worked and saved hard and so was able to pay 20 million kip which was half the asking price for the land. The balance of another 20 million was to be paid in 2 months time, by the end of March!

The family then dismantled their existing bamboo house in Oudomxay and together with the chickens, plants, family and a few belongings, the house was put on the back of a rented truck and moved 200 km to the new land on the outskirts of Luang Prabang.

The land was cleared with the help of family members and the house was re-erected in just 2 weeks!

The house is a typical Hmong house with no windows and just 2 doors with a covered verandah out the front. It has an earthen floor, galvanised iron roof and woven bamboo walls. There is no running water, no kitchen or toilet. The 3 bedrooms are made on raised bamboo platforms in 3 corners of the house and are screened off with fabric, bamboo dividers and mosquito nets. There is no electricity.

Once the house was up, Chandy invited a few of us to go out and meet his family, see his new house and have lunch. It was a truly wonderful experience and a real treat to watch a Luang Prabang salad being made from scratch.

The ingredients for this Luang Prabang salad included 30 hard boiled eggs, brought from town; a huge pot of salad greens, many tomatoes cut and sliced, a couple of kilos of peanuts brought from Oudomxay and shelled by 2 men of the family. These were then dry roasted over a fire in a pan and later quickly husked and then ground using a mortar and pestle. The cooked eggs were separated – the whites chopped up into pieces and the yellow yolks mashed in a large bowl with a jar of mayonnaise, salt, lots of sugar and the ground peanuts. This mixture was then mixed through the huge container of salad greens.

All members of the family helped in this process and then all invited guests and family sat on tiny wooden stools around the huge container of salad, a pot of steamed rice and a freshly killed and cooked chicken. Everyone agreed this was one of the best salads we had eaten. It was delicious.

In March, one of our LEOT volunteers who had had some experience in setting up small solar panels for families in rural villages, agreed to help us install a similar panel at Chandy’s house. The family now has solar power that allows for 4 lights.

In April, a bore was drilled close to the house and so the family also now has easier access to water.

At the beginning of April, Chandy was able to give up his night-time job and just work as a teacher at LEOT during the day. He now gets regular sleep, although it took him a couple of weeks to get used to his new sleep pattern. He  also now has time to help his parents with other jobs that need attention at the new family home.