Somsay, or Say, is 25 years old and was born in 1991 in Han, a small village in Sayaboury province.

There are 8 people in his family, one younger brother who is about to finish high school and a younger sister who is in her last year of Finance College. They both live with him in Luang Prabang and Say, as the older brother, accepts full responsibility for their well-being. 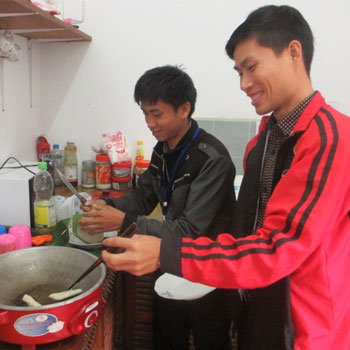 His 3 older sisters are married and still live in Hongsa district near their parents. They are farmers. Say also now has 3 nephews and 2 nieces.

The village where he was born is the site of the big Hongsa Mine Mouth Dam which was built about 5 years ago. Electricity is sold to neighbouring Thailand. It is one of the world’s largest electricity producing dams and employs around 2,000 Chinese and Thai workers as well as some local Lao people from Say’s village.

Many of the family’s friends and neighbours were forced to move when it was decided to build the dam here and were relocated more than 10 km away in a new town. Luckily his own family did not have to move.

In 1997 he began his schooling in the local school and continued from primary through to secondary school in Han village. It wasn’t until he reached upper secondary school in 2006 that the town had electricity. Before then he studied with the aid of a candle and an oil lamp.

When he was in secondary school, Say had a plan to make some money for himself to help support his future education. He cleared and fenced some land in the nearby mountains and grew sugar cane for about 4 years. He would go and plant it, chop it and bring it into town to sell at the local market.

When he graduated from high school in 2009, he decided to come to Luang Prabang and study to become an English teacher at Souphanouvong University. Luckily his parents were supportive of this move but could do little to help him financially. He would have to work to support himself. While a student at university he shared a dormitory with 2 friends.

When he arrived in Luang Prabang in 2010, he didn’t know anyone and he didn’t know any English. He began working on building sites as a labourer, working with concrete. He later became a waiter at a restaurant and then worked in a guest house & hotel. He also sold lottery tickets from an office from 6am to 3pm before going to his classes at university from 4pm to 9pm each day. He taught himself English while working on the job and studied hard each day to improve his skills in this area. 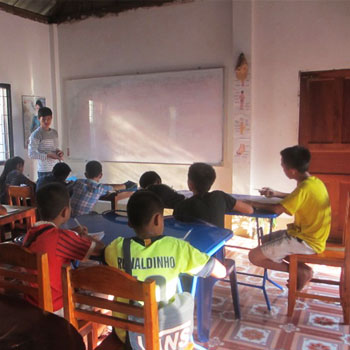 When he arrived in Luang Prabang he didn’t have any transport so he saved hard and got himself a bicycle and within 2 years he was able to buy himself a motorbike.

While at University, he met his future wife at a party that he attended with friends. They married in 2014. Her name is Jieow and she works in a nearby hotel taking care of hotel bookings.

Say now lives in Khauteening village with his wife. Her 2 brothers also live in this village. Her parents however live further away in Nan district.

When Say graduated from the university in 2014 he was looking for work and a friend suggested he apply to become a teacher at LEOT.

He began as a part-time/trainee teacher for several months and now teaches both Beginner and Elementary level students.

Say’s love of teaching also encouraged him to start his own little school in his village, initially he did this from his home but because of the growing number of students, he now rents another space. He now has 65 students. He holds English classes after his teaching duties at LEOT have finished for the day. As well he teaches on the weekend.

He gets up early each day and after breakfast and taking his wife to work, he sits at his computer and prepares his lesson plans. He takes his teaching very seriously.